We all love a good family game at Christmas so here are 15 of our favourites that don’t require a lot of equipment and you can play in just fifteen minutes!

A scarf (or blindfold), pen and paper and the following link: 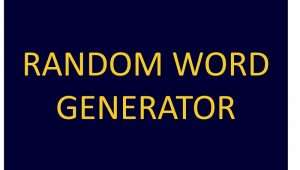 Players take it in turns to be “on.” You can use the link to generate a random word and then try and draw it – while blindfolded – and see if the other players can guess what you’ve drawn.

Only the person who is “on” reads the word then they have 1 minute to draw it and if someone guesses correctly, both the person drawing and the guesser each get a point. At the end of 15 minutes the player with the most points wins. 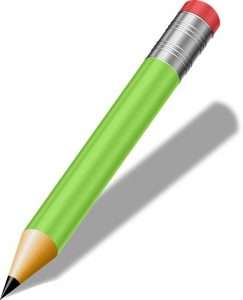 A few scarves (or blindfolds), pen and paper and some smelly items – if you’re stuck, try the kitchen to spice up your ideas with things like ginger, lavender, mustard, marmite, cayenne pepper, cucumber, banana, sage, washing up liquid, jasmine, vinegar etc. – you get the idea!

All players except the “smell master” wear a blindfold and have a pen and paper.  The smell master finds a number of smelly items and allows each player to take a turn to sniff out the correct answer.  Players can only use their sense of smell to try and identify each item and write it down.  At the end the person with the most correct answers written down is the winner.

It’s amazing how you think you recognise a smell but you can’t actually identify it until you are told what it is! 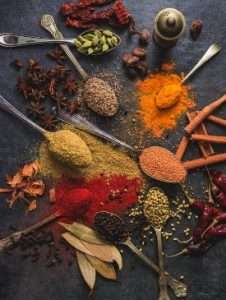 A pen, some sticky notes, and some good ideas.

Write the name of a celebrity or a well-known person or character on a sticky note and stick it to somebody’s forehead. That player must then ask closed questions (to get a yes or no answer) until they correctly guess who they are. Who can guess the most correctly in 15 minutes?

Kids love it when they catch you out and it takes a long time to guess your celebrity!

Some biscuits – (preferably chocolate covered ones for added amusement😉)

Each person takes one biscuit and places it over their eye. They will probably need to tip their head back to get it to balance!  They then have to try to negotiate it into their mouth without using their hands. If it falls off their face, they must start again by placing it back on their eye.  Who can be the first to get it from their eye into their mouth?

This is great fun especially with a chocolate biscuit as the longer it takes, the more the chocolate will melt.  Make sure you get your camera ready to take some photos of very strange facial expressions as players try to move the biscuit! 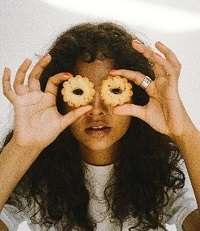 Each player takes a turn at releasing 3 balloons into the air.  They must try and keep the 3 balloons up in the air for as long as possible. The person who can keep all the balloons from touching the floor or furniture for the longest is the winner.

This is a nice easy game for all ages and keen footballers will be determined to try and show off their keepy-uppy skills! But you might want to avoid this one if you have delicate furniture… 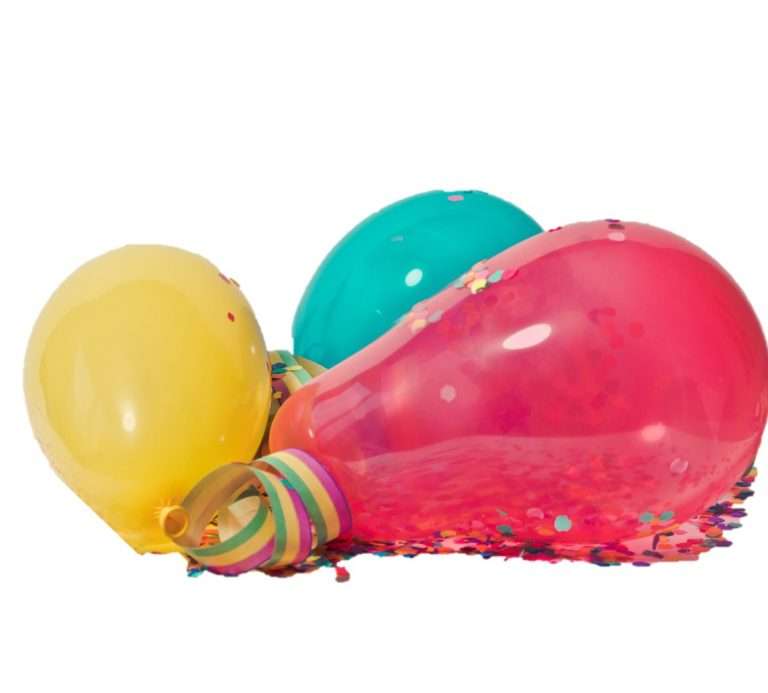 a stack of coins and a stopwatch (or phone timer)

Put a large pile of coins in the middle of all the players. You all have one minute to build the tallest stack.

Rule: you can’t touch another person’s coin stack or take any coins that you don’t immediately add to your tower.

Again this is a game for all ages.  The challenge is finding the balance between being careful and fast enough to have the highest tower at the end of the time.  It can be a case of the tortoise and the hare. 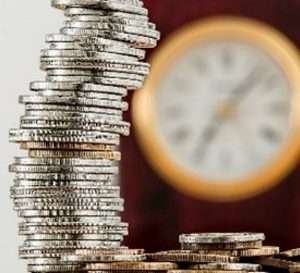 All the other players continue to take turns rolling the dice.  As soon as another player rolls a 6 the first has to quickly remove the hat, scarf and gloves to allow the second player to dress up and try to eat the chocolate.  This can continue until you have run out of chocolate or you’ve eaten enough!  Note you can not pick up the knife and fork until you have all the clothing on.

This is great for a bigger group of children (and adults) – it’s fast and furious so kids love the speed of dressing up & let’s be honest who doesn’t want to try and eat as much chocolate as possible? 😉 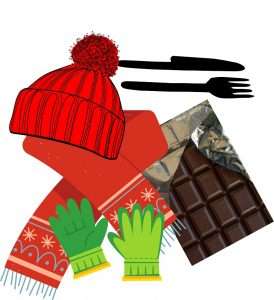 The aim is to be the person who can count closest to 1 minute.  One person has the stopwatch and shouts go and the first player reads out loud from a newspaper or book whilst tyring to work out how much time has passed.  When they think it has reached 1 minute they have to shout “stop”.  The time is recorded and the next player has a turn.  The player who stopped closest to a minute wins.

A minute is a lot longer than you think but the time goes much faster when you are doing something else at the same time – like reading.  Very young children can just count instead of reading until they think they have got to 1 minute. 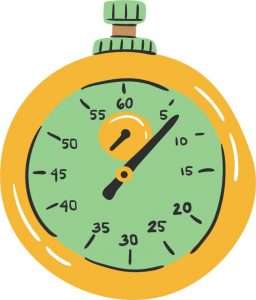 2 pairs of chopsticks, 4 bowls and some sweets – like m&m’s, skittles, maltesers etc. (or you could use dried rice or pasta)

Share the sweets between 2 bowls. Two players each use a pair of chopsticks, in one hand, to move the sweets from their full bowl to an empty bowl as fast as they can.  The winner is the first player to transfer all their sweets to the new bowl using only the chopsticks.

Kids love this and can practice their dexterity in the process! 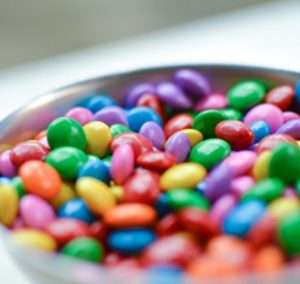 All players can play at the same time.  Just make sure everyone knows when the game is starting and that the rules are they are not allowed to say yes or no (also you are disqualified if you don’t reply or speak at all).  You can continue with normal conversation but if you say yes or no you lose a life.  Each player can have 1-3 lives (depending on the number of people playing).  The person with the most lives or the last person with any lives is the winner.

This is great fun for catching people out and encourages more than monosyllabic answers from older children! 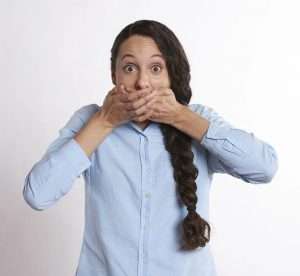 Or why not try a fun Quiz? We’ve selected some of our favourites below

Use this link or choose a different genre to suit you all.  You can either have a quiz master who plays (& maybe replays) the link, and you guess the song either in teams or playing individually.  You can be first to shout out the correct answer or alternatively write the  answers down and check at the end.  Or you can play this one all at once, without a quiz master, as the answers appear automatically.  The winner has the most points at the end.

There are 40 celebrities, can you guess who they are from a photo of just their eye?  You can either be first to shout out the correct answer or write answers down and check at the end.  The winner has the most points at the end.

13. Name the Movie from the Soundtrack

There’s a blockbuster variety in this quiz… may the best cinema goer win!

You can either be first to shout out the correct answer or write answers down and check at the end.  The winner has the most points at the end.

You can either just show all players the logos – number them 1-20 and then ask players or teams to write the answers.

Alternatively let each player try a different quiz online and see how many they can answer in the 4 minutes that the quiz allows. 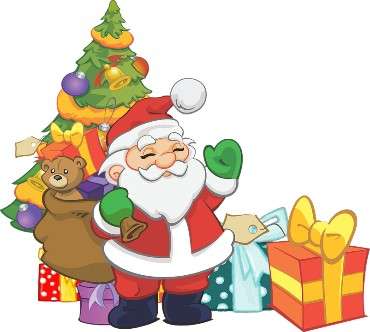 You can have a quiz master and either ask each question in turn and award a point for the fastest correct answer or ask all the questions in each section, and players or teams write their answers and then check the answers after each round.

How much do you know about Christmas?  There’s a good mix – some of the questions are really easy and some are not!

Whichever games you end up playing we hope you have loads of family fun and we wish you a very Merry Christmas!

And if you would like to help your child improve their primary maths using our unique FOCUS Tutoring – in bitesize 15-minute chunks – sign up for a free taster week now.

Can Face to Face Games Play a Role in Education?

Research that led to PLYTIME Learning

26th May 2019
Manage Cookie Consent
We use cookies to to give you the best online experience. Please let us know if you agree to all of these
Manage options Manage services Manage vendors Read more about these purposes
View preferences
{title} {title} {title}